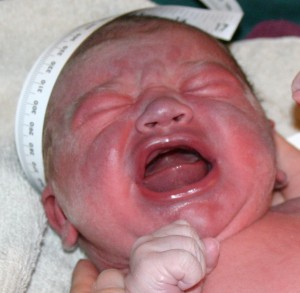 After I had my first child, when he was 10 months old, I developed a health condition that was pretty bad.  It’s called Benign Intracranial Hypertension (BIH). I had to be medicated and periodically go in for spinal taps, which would put me on bed rest for usually a week.  When I got pregnant with my second child, I had one more spinal tap and came off my medication and was fine throughout the pregnancy..  The condition seemed to go into some sort of remission, until I got pregnant with my third child.

Before I was pregnant with my third child, I had called Jan to get information about home births and all that, and Jan was very nice over the phone.  But when I got pregnant and the BIH came back, I called Jan to tell her that I would not be able to have a home birth because this condition had come back and my pregnancy was now considered high risk.  I had had a spinal tap and it didn’t work this time like when I was pregnant with my daughter.

I will never forget that call to Jan that day.  That is the day that changed my life forever.  I was so upset and scared and discouraged about the fact that I was pregnant with this tiny baby growing in me. At this point I couldn’t even function normally to take care of the two kids I had. What was going to happen to my new baby if I was back on medications? And financially what was going to happen to us?  We didn’t have insurance that would cover pregnancy or the problems I was bound to have now.

Jan gave me hope.  When I called her, she mentioned that she knew homeopathy.  Now thankfully I had been introduced to homeopathy about 5 or 6 years earlier briefly, so I knew a little bit about it.  I can’t remember exactly how this all went down, but one night after my spinal tap I could feel that the problem was back and the tap didn’t work.  Called Jan and gave her my symptoms.  She suggested a rare remedy, which she just happened to have one dose of, that she thought might work. She offered to give it to me. She met my husband half way between her house and ours that night to give it to him……….the next day I was able to get out of bed, and I was able to function.  It was unbelievable to say the least.  The next months proved to be amazing as well.  I kept taking the remedy regularly and had no problems….NONE.

With the BIH no longer a problem, I began to see Jan regularly as I planned my home birth. Seeing a midwife was such a wonderful experience. She spent so much time with me, and was always so easygoing. Yet she was on top of everything.  When my iron level was low, she suggested some really yummy (not) stuff to start taking, and she made sure everything was going normally.  She always knew natural ways to deal with a lot of things that came up. I always looked forward to seeing her for our appointments and really felt like I got to know her as she got to know me.

Finally, the day was here, my baby was ready to be born. Jan came with her assistants and set up the birthing tub and checked me out. I was about 5 cms. A couple of hours later, I was 7 cms and I got into the tub. Wow – I would never want to go through labor without the birthing tub again.  I can remember getting out of the tub to get checked to see if I was progressing (I was the one who wanted to get checked) and I just couldn’t wait to get back in that hot water.  The water made the pain of the contractions considerably less. The labor was pretty easy but after 4 more hours I was still hanging out at 8-9 cms, so Jan offered to break my water to finish things up. That really worked, because just a few minutes later, along came Shawn. He was such an easy birth.  No complications, no problems at all, it all went so smoothly.  After the birth of Shawn, of course Jan checked us both out and then she stayed with us for quite some time.

For my next pregnancy, I was so happy to “have to” see Jan on a regular basis again.  Of course, I was ecstatic about our new baby.  My pregnancy went along just fine, and I was still mainly free of the BIH symptoms. I guess I got a little bigger, so when I went overdue, she suggested some natural things to help me along into labor, thankfully, as I don’t think this baby would have ever come out!!!.

My delivery on the other hand was nothing like any of my other deliveries.  My son, Tyler, ended up being a fairly large baby (9# 12oz).  He was on his way out into our world and he got stuck.  The labor was faster than my last one and we didn’t have time to set up the birthing pool, so I was laboring my own bathtub. The baby’s head came out while I was lying on my back in the tub and Jan recognized that the baby’s shoulders were stuck. She had to perform a procedure she had never had to do before.  She had studied it just in case something like this would ever happen, but you would have never known she had never actually done it before.  Jan could explain it much better I am sure, but she basically had to go in and get him unstuck.  She knew exactly how to position me and what to do. I had to turn onto my hands and knees, and then eventually she had me stand up, while she worked inside me to get the baby loose. You really couldn’t imagine how cool, calm, and collected the whole midwifery team was through all of it.  Thanks to them, I have another healthy baby boy.  Looking back I feel like they probably saved his life.  I have heard that if that would have happened in the hospital, I would have been cut all the way and the docs might have broken Tyler’s collar bone to get him out……….Can you imagine……..I know that it happens but still….

Through my connection with Jan, I have come to know homeopathy a little better. She taught me how to use homeopathy for common illnesses with my family, although I sometimes still rely on her for what remedies to take and things like that. I have witnessed her knowledge in homeopathy many, many times And her understanding of homeopathy really adds to what she offers as a midwife

All in all, if it weren’t for homeopathy, I am sure our third baby would not be healthy and neither would I. I would have been on medication while pregnant with him and who knows how that would have affected him, and I would still be sick with BIH. We would never have been able to go ahead and have our fourth baby, as I would have been incapacitated and unable to care for the children I already had. And I know that midwifery care really made my last two pregnancies and deliveries much better than they would otherwise have been. I am really grateful that I was led to both of these wonderful forms of care.