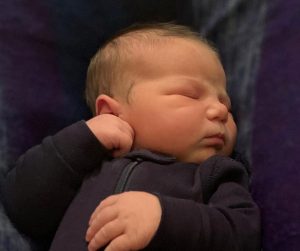 Little Miss Miriam was due December 6, 2019. From the very beginning of her pregnancy I was sure of this “due date” without a doubt. But, because I carried Olivia past 41 weeks, I told myself that this new baby would likely do the same.

Her pregnancy was beautifully uneventful. I had much less morning sickness than with Olivia but the aches of pregnancy did come sooner. Overall, it was a great pregnancy apart from lots of pubic pain and towards the end, all over discomfort as to be expected.

I chose very different prenatal care, for many different reasons, that ultimately gave me an incredible pregnancy and birth. I had a midwife I trusted and chose to birth at home. And I sought regular chiropractic care. Both of which left me feeling cared for and heard.

So, as December approached, I had very little expectation that the baby would come in November but of course, I still thought it would be amazing. I told people who asked when she was due, “between Thanksgiving and Christmas.” Well Thanksgiving came and went, as did her due date. With Olivia, I was induced at 41ish weeks, which then led to an unnecessary cesarean section, so I knew I would not be inducing this baby unless there was a true medical emergency warranting it.

Going overdue again, although I expected it, was still a total mind game and was very hard with each passing day. But I knew no woman had ever been pregnant forever, so I too would have my baby. Furthermore, there was no reason to believe Baby was in any distress and my body was perfectly well, albeit sore and tired.

Sunday (12/15), our family got some really hard news and it sent me to a very dark place but I think it was necessary for me to fully grasp that God is in control and we need to just let Him do the job and trust that He will give us the strength we need.

Monday, I had a chiropractic appointment and a dear friend took me to coffee and we had kid free time that was incredibly needed. Then I went home and had a really nice afternoon with Colin and Olivia while eating super spicy food for both lunch and dinner, because why not!?

Tuesday, I had a midwife appointment where I asked my midwife to perform a “stretch and sweep” of my membranes because it wouldn’t hurt and maybe, just maybe, it would throw me into labor. (At this point I had been having “false labor” almost every night for weeks and Monday night felt SO close, like it just needed a little nudge.) By Tuesday afternoon, I was having a bit more uncomfortable Braxton Hicks but because of all the prodromal stuff of the weeks before, I tried to not pay attention. But that activity lasted through the night! I was able to sleep on and off and the sensations spaced out but when I woke up Wednesday morning, I had a feeling something was different because I hadn’t been waking up with sensations that strong any other morning.

Wednesday morning Olivia came in and we did our normal cuddle-in-bed-with-coffee routine. Except that morning she asked to nurse, which was not usually what we did. She nursed the entire pregnancy but mostly at night before bed. So, I let her nurse, and unlike other times where she only nursed for a minute or two, she nursed for over 10 minutes! And in that time I got two or three sensations that made me have to really concentrate to get through them. So, Colin took Olivia downstairs to get breakfast and I hopped in the shower and while in there the water felt amazing through the sensations that were definitely getting stronger. I still was not convinced labor day was here! I thought it would just all go away. But, by an hour later, around 8:30am, the sensations were strong and took all my concentration. So, I texted my midwife in a panic because I didn’t understand how the sensations could be so strong already and I wanted to just be in the birth pool. She headed my way and we got Olivia off to a friends house, but I was still worried I called it too early and it would all go away! But, once my midwife arrived, Colin and I had gotten into a groove with working through the sensations. They were strong and consistent but unlike Olivia’s labor, where the sensations were pitocin induced and all felt horrific, these had variation and really made it possible to build up to the true intensity needed.

For the next few hours, I labored in my room and the pool down stairs. The sensations were getting stronger by the hour and the water was definitely my favorite place to be.

Around 6:30pm, Olivia came back from our friends and we were able to get 20ish minutes together where my sensations spaced out a bit; she even got in the birth pool with me and it was one of my favorite parts of labor!

Once Colin put her to bed, I told my body it was time and let’s get going! Little did I know what I was asking… the next three-ish hours were SO intense. I did my best to focus on the affirmations I had practiced through pregnancy but the power of the sensations often overtook any control I had. I am a very vocal laborer and focusing on a low, deep “oooo” was what kept me concentrated.

Around 11pm, I was so tired and felt like nothing was happening so I asked my midwife to perform a cervical exam so I could wrap my head around where we were heading. I was 8cm and fully effaced but Baby’s head was a bit misplaced from my cervix and she wasn’t tucking her chin. But she was in the face-down position, which is ideal for birth, so that was a relief. Because her head was a little turned, my midwife suggested we try a few repositioning techniques to encourage her along. I knew these would be very uncomfortable but after some persuading, all by myself in my head, I agreed to try the three separate techniques. That hour was SO hard. But after, her head was better applied and her bag of waters was bulging, which was a great sign of progress.

I then got back in the tub and over the next hour,1-2am, I labored entirely on my own while my support team got some rest. It sounds crazy, but I think it was necessary for me to walk that part completely on my own. They couldn’t help me in any way and I had to face this transition with just myself and my baby.

With every sensation that neared 2am, I wanted to ask my midwife to break my water and get this over with, but a small voice told me to just keep going. At around 1:50am, the student midwife checked heart tones while I was on my knees and got the MOST intense sensation where I thought the “pop” I felt was the Baby jumping but with the next sensation, I had no choice but to PUUUSHHHHH. It was insane. I have heard many women talk about it but to actually feel that irresistible urge, was mind blowing. But, because I hadn’t realized my water broke, I reached inside and where before I had felt the bag of waters, I now felt my baby’s head. It may sound weird but I didn’t really get excited, I just got even more motivated and in the zone.

It took a few tries of pushing, which was all lead by myself and what my body was telling me to do, to get in a groove but once I did, pushing was amazing because I was able to actually feel like I was doing something and with my hand constantly touching my baby’s head I was able to feel actual progress. It was the craziest thing!! I went from so little energy to just pure focus and determination. Once the “ring of fire” came, I had to concentrate so hard to pace my pushing so I didn’t hurt myself even more. Eventually, I had pushed her head out and waited for the next contraction to push her body. But, it wasn’t coming so after two minutes, my midwives helped me out of the pool and told me to get on my hands and knees or a deep lunge, where I instantly got the contraction needed to push my baby out. With two, full on, deep and primal roars, my baby shot out and immediately started screaming, at 2:41am! Now when I say roar, I can’t describe now how I made that sound, what it sounded like, nor could I try to recreate it, but it was the most primal sound I’ve ever heard and it was pure power.

I immediately said, “GIVE ME MY BABY!”, which my midwife was already doing by handing her to me through my legs and my first thought wasn’t, “oh my baby” it was “OH! You’re heavy!”. Little did I know…

I moved to the couch, which I had birthed in front of, and had the most blissful time kissing my fresh baby. The whole time Colin was asking, “WHAT IS IT!?” because we didn’t know the gender but I really didn’t care – I just wanted to kiss her. But, once on the couch I looked and revealed that we had another baby GIRL. It was magical. One midwife then said, “You did it! You got your HBAC!”. And I hadn’t even thought about it yet! So I said, “Oh my gosh. I f***ing did it!!!!”

Over the next two hours, we laid on the couch and bonded, I delivered her placenta, and we just all took in what had happened. Colin cut her cord and then our midwives did their newborn exam. When they measured her, I was surprised that she was 21 and ¾ inches long but when they weighed her and both midwives said, “uhhhh what??” followed by, “I dont know if it’s closer to 10lbs 5oz or 4oz”, I was speechless. Then Colin looked and said, “I think that’s closer to 6oz!”

And there we had it! A 10lbs 6oz, 21 ¾ inch long, Baby GIRL. Successful vaginal homebirth after Cesarean section.