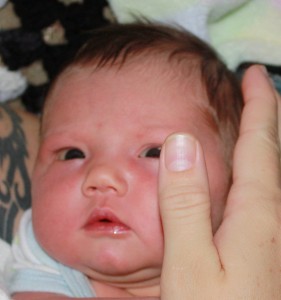 The birth of Madelyn Joy Benson

My EDD was October 2 and time was closing in, and I was quite exhausted from pregnancy and running after my 2 year old. Friday morning. I was working in Fond du Lac at the technical college and trying to get into Kohler’s Water Spa for a massage that evening. Grace’s babysitter had told me her daughter-in-law works there and did that for all three of her kids when trying to bring labor on. I was able to make it in for a massage around 7p.m. Afterwards, I was very relaxed and sleepy but I just didn’t feel comfortable when I went to bed.

I woke earlier than usual that morning with slight cramps in my belly. I went to the living room to see if the feeling would go away when I sat up. The feeling was a slight discomfort but noticeable. It was not going away so I decided that I better get up and get stuff done. Once the rest of the household awoke, I called my sister to have her come and help me set up the rest of the bedroom where I would be birthing my baby. My husband took our two-year-old shopping, and my sister and I worked on cleaning up a little and getting things ready for when the baby came. I called my folks to tell them that I would be having a baby today and to see if they could take Grace. The morning went by pretty easily since I stayed busy, so by the time my husband got home and after Grace was picked up, my labor started to intensify.

Our friend came over around 2 p.m. and we started walking up and down our road to try to get things going. As we did that, the contractions got closer together. We stopped to talk to the neighbor and let him know what was going on. It was not the nicest day, but when we were walking it was sort of sunny but cool. We went walking back up to the house. Shortly after that, Jan pulled into the driveway, followed by Pam. I had to stop at Billy’s truck to have a contraction as we figured out if we were going to go back into the house. We all went into the house, and Jan and Pam started setting up the tub and getting things ready. I guess my husband had nervous energy to burn off because he was making cookies. I just kind of walked around, just waiting for the next contraction to come. I tried sitting on the exercise ball but that wasn’t working. Then I tried to put my elbows on it and let my belly hang down. That wasn’t working either. Finally, I just sat on the floor and waited.

After everyone settled in, we chilled out in the living room. As soon as the water was ready, I went into the tub. Oh, what a great feeling! Floating during every contraction definitely helped. Jan came in and lit some candles, and I had my Wade Morissette cd in. My sister in law came in for a while and we talked. I felt like I had to go to the bathroom, so someone helped me out of the tub. I was hoping I would be able to hurry up and go to the bathroom before I had another contraction but that didn’t happen. Having a contraction on the toilet by yourself isn’t a glamorous thing. After that I laid in bed awhile since I was pretty warm from the tub.

My contractions were getting worse so Jan pushed on my lower back to try to relieve some of the pressure and she showed Billy where to push. He didn’t do it just right. Everything was started to annoy me– my husband, the music, any position that I was in. Jan checked me and I think I was at 9-1/2 cm. I got back in the tub and shortly after that, my contractions were horrible. So bad that I could feel myself cinch up, but I knew that if I did that I would be making the pain worse. I called for Billy and when he came, he tried to get into a good position outside the tub to support me. My body started pushing. After the first couple of pushes, my water broke. Jan must have been able to tell by my vocals, because they checked for the head and the baby’s vitals. After that, I dreaded each wave that came over me. The feeling of nausea came over me with each push. I felt the head come out, almost like a pop, and Jan and Pam came to the tub to time and check the baby and do what it is that they do so well. Once the head was out, Jan was there to guide the body out. I didn’t feel like I had pushed all that long and before I knew it, she was born.

I feeling of relief came over me. I was holding this little baby who was covered in white sticky, slimy stuff and she was screaming but she was mine, and I don’t think I could have done it any better.

I was still in the tub holding Madelyn (we weren’t sure of her name at that time) while Jan worked on helping me birth the placenta. After pushing the baby out, I felt so weak and I almost felt like I wouldn’t be able to get it out. Of course it came out and Billy cut the cord. I got out of the tub, dried off, and got dressed while Jan and Pam did their assessments. I crawled into bed to try to breastfeeding Madelyn, but it seemed like she was sleepy, as I was. They took her out to show our guests and I slept awhile. Then they came back in because they needed to check me and make sure I drank and peed. I needed stitches also. Once all that was done, I tried to nurse Madelyn again but she was so sleepy. She slept until the morning and even though I was so tired, I could hardly sleep. I was so excited to watch my baby sleep and make her little noises. I was in love.