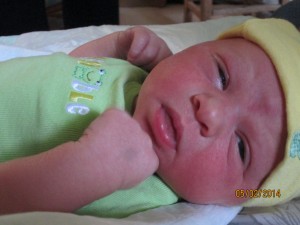 From a dad’s perspective:

I often forget that for many people, delivering a baby at home is still in the realm of crazy. As a result of this lapse, I sometimes bring it up in conversation before remembering that I need to lay some groundwork to change that perception.

To my mind, madness is rushing off to a giant machine-filled stack of sick people to deliver a tiny being with a yet-developing immune system. It can be done naturally because it is a natural process. Donʼt get me wrong, I donʼt wish to downplay childbirth; Iʼm not the one who had to pass a baby through my vagina (my position as supportive holder of the space and official contraction timer was easier than ever with the latest contraction timer app). I have been told that having a baby is somewhat like passing an enormous poo, and that is an area where I do have some experience. Just the idea of rushing off to a crowded, hectic, unfamiliar structure where a team of mostly strangers in funny outfits observe and poke me as they take notes causes my muscles to clench.

AnnA and I were able to achieve a certain peace during a new and potentially scary experience largely because we understood that when things got wild and those contractions intensified, we didnʼt have to go anywhere. We stayed in the space weʼd already chosen as the place where we most wanted to live, and let our midwife, Jan come to us. Jan, not Doctor Whomever, who walks in and takes a look at the computer before repeating most of what he said last time, but Jan; and her apprentice, Jessica, who both hug us every time we meet and who, by the time they arrived to assist in the delivery, are like old friends. Thatʼs not to say there are not great, personable doctors; we had one that we loved standing by, but there are levels of familiarity that the pomp and circumstance of our monolithic medical system just donʼt allow. There was a time when the doctor would visit patients at home, and presumably would intimately get to  know the family -maybe interacting at a level of directness where specific prices or even trades could be discussed, but the possibility for that level of rapport has largely been squeezed out of the system.

In dealing with quite a few M.D.s over the years, my sincere questions have many times been met with genuine annoyance. Ever try asking a typical U.S. medical doctor how much his services cost? Can you imagine the simplicity of having the total price set in advance so that all parties can agree to it? Once youʼre through the door at the doctorʼs office, the meterʼs running, and in perhaps a month the bill will arrive and then you discover that insurance didnʼt cover any of the tests that friendly doctor ordered (charging hundreds of dollars for a half hour spent mostly waiting).

In contrast, Janʼs interactions with us seemed geared toward gaining a broader understanding of our lives and relationship to learn how best to support us. She presented a thorough guide listing her recommendations, helping us incorporate a diet and lifestyle that would nourish the natural process of childbirth. We got the feeling that she was just as interested in learning from us as we were from her. We would often spend an entire hour with Jan and Jessica and the discussions ranged far beyond the immediately relevant topics of pregnancy and birth, allowing us to quickly get to know each of them.

They focused on putting us at ease. There were several mornings before our meetings where AnnA and I were very agitated about all the uncertainty surrounding our situation. We knew we wanted to do a home-birth but we had very little money and had yet to actually find a home! Both women had a knack for turning our attention from the frivolous worries threatening to consume us to a mindfulness of the natural beauty of the process.

For us, that mindfulness was easy to cultivate in our home. When AnnA woke me up around midnight to tell me that our son was making his move, I didnʼt have to jump out of bed, get dressed and rush her off to the hospital. We were able to just lie there together as the waves intensified. As she paced around the apartment I became the mountain (a metaphor I latched onto while reading one of the many books Jan lent out to us): the supportive, yet unobtrusive holder of the space, whose job was simplified by the comfort we already felt in such familiar surroundings (not to mention the ease of the single tap required to execute the contraction timer app –ah technology!).

That level of familiarity we felt in our surroundings extended to Jan and Jessica partly due to our constant access to them; they would promptly respond to any concerns or questions and that final night was no different. After supporting us over the phone our two friends arrived at our front door, and before we knew it, AnnA and I were soaking in the calming warmth of the tub they had set up in our bedroom. By candlelight AnnA began to push.

The internet makes available many videos of women giving birth so, of course, I had viewed many before we finally arrived there in the tub. Nothing could have prepared me for those final moments, as the woman I loved completed her transformation to another level of existence, right there in our own intimate space. Thereʼs no way to describe what I felt as my sonʼs head emerged from beneath the water. All the build-up, the uncertainty erupted into joy and relief as Jan helped guide his tiny body into our arms. I will never forget the wave of bliss that accompanied the tears streaming down.

Suddenly the whole world was there in the water. We held each other in love, gratitude and ecstasy. Months later the memory still has me wiping tears from my eyes. I simply cannot conceive of a more beautiful beginning: three brand new beings emerging from the water.

When AnnA and I entered into this process we had little understanding of who we were and what we were doing. I did not take the gift and responsibility to create life seriously. Now, I do. I will never be the same. AnnA will never be the same. Jan and Jessica not only supported her throughout, but in the end knew how to step back and allow AnnA to step up and claim her birthright. Our bond has never been stronger and is rooted in a reverence for creation that we cannot soon forget.